Day #56: In the Doghouse at the Farmhouse

I've created puppets for this project in my studio, at home, and in moving vehicles. Today's creation happened in at Urban Farmhouse, a great farm-to-table restaurant in Shockoe Bottom.


There was a gathering of 365ers (a bunch of people in the area doing their own unique and fabulous 365 projects) at Urban Farmhouse, and the energy being around a group of creative people is really amazing. Today's project was born of this gathering. 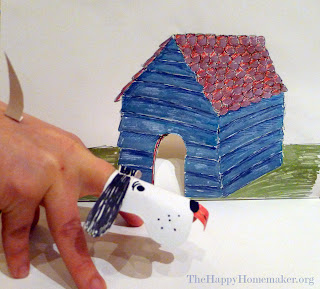 I had the pleasure of sitting between Noah Scalin of Skull-A-Day fame and Madonna Dersch of Happy Homemaker. During the course of the conversation I was illustrating something with my hands and had the idea to create a "hand puppet" that I'm sure has been manipulated on many a restaurant table. The ubiquitous "hand dog."

I don't know if what I was doing  is really called that, but you get the picture. Kids do this -- especially making the dog raise a back leg so it can mark its territory, right?

But I was fortunate enough to be sitting next to Madonna...and we were both inspired! You see, Madonna is making houses and structures of all types in all sorts of media, both 2-D and 3-D. She has made houses from oranges, houses that would be great for Hobbits, and she's doing a great series of houses where she has a different house for each letter of the alphabet -- even Q (I told her they would make a great children's book).

I bet you can think of some sort of structure that goes great with a dog. Ta-daah! Two blogs in one fell swoop.

I didn't imagine we could actually pull this off in the restaurant, but Madonna had a bag that reminded me of Hermione's purse in Harry Potter Book 7 -- a bag that had an invisible expansion spell put on it so she could keep all of her books (a whole library's worth!), clothes, a tent, and all sorts of things necessary for young wizards on the run.

Me: Hey, does that sketchbook have any new houses in it?

Madonna: Not really. It's still pretty new. I only have some basic sketches in it.

Me: Wow. It would be so cool if I could actually make a real dog right now and you could make a doghouse! Then we would be done with our projects for today.

Madonna: We really should!

Me: But I need some scissors...

She had two glue sticks. I was set.

And we both set to work. 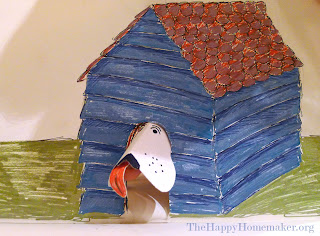 I'm so glad we were able to collaborate on this. It was so fun to talk with other 365ers about the joys and frustrations of doing these yearlong creative commitments. I look forward to doing it again!

After we left the restaurant, I headed to the studio for a little bit more work. I needed to shellac something so it would be dry by tomorrow morning. While there, I made a little video of my "hand dog" in action.


I'm going to have to get a bag like Madonna's for puppets on the go.
by Barefoot Puppeteer at 11:13 PM

My name is Heidi. I am a puppeteer, puppet builder, artist, workshop leader and, well, lots of other things. This is the site of my 365 Project, a personal creativity challenge, where I make some kind of puppet -- any kind of puppet! -- every day for a year. It began on February 4, 2011 (my birthday). Follow the adventure!